Haiti – FLASH : Fearing the worst in Haiti, the Dominicans deploy armored vehicles at the border 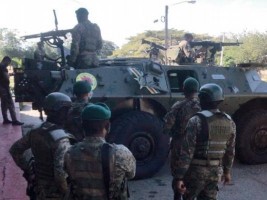 Due to the socio-political anti-government unrest in Haiti and the failed coup attempt on Sunday, February 7, the Commander of the Dominican Army, Major General Julio Ernesto Florián Pérez on the orders of Lieutenant-General Luciano Díaz Morfa, the Minister of Defense on Monday deployed an imposing military device comprising B150 tanks, tracked assault vehicles and other sophisticated technological equipment.

The military high command assured that the Dominican border is now fully reinforced and the sovereignty of the Dominican territory assured.

Commander Florián Péreza said there was a significant increase in troops, including 2,400 soldiers from the hunters of Constanza and Operation Bayahonda who are stationed at the border.

In addition, several hundred soldiers from different specialized units have joined the some 10,000 soldiers already stationed along the border aims to face any eventuality and avoid a possible massive flow of Haitians fleeing their country to seek refuge in the Republic. Dominican in the event of riots or worse of a civil war among the scenarios considered.

For the moment the border is calm “Thank God everything is normal, there have been no problems at the border, but we are keeping all the measures in place,” said Defense Minister Diaz Morfa.

Note that since Friday, February 5, super Tucanos observation planes have been monitoring the border.